"TRAILS END & GATEWAY TO THE STARS" 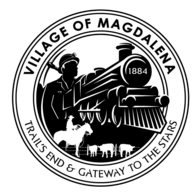 Known as the "Trails End", Magdalena is rich in ranching, mining, rail and cultural history.  Starting in the late 1890's to the early 1970's Magdalena was the end of the trail for cattle drives that went as far as Springerville, AZ.  Mines in Kelly helped to make Magdalena a boom town in the 1800's. Magdalena is nestled away in the Magdalena Mountains at an elevation of 6,548 feet. Magdalena is also known for its beautiful sunrises and sunsets. ​​